Fashion academy graduate Lazarus Shuib started his career as a cabin crew before going on to create our iconic cabin crew uniform. Having joined airasia in 2001, Lazarus has seen airasia as a full-service airline under DRB-HICOM and the subsequent takeover and growth of airasia as a low-cost airline under Tune Group.

When I was young, all I ever wanted to do was to draw. That was some 30 years ago. In class, I was always drawing, sketching, and dreaming big. I loved to draw so, so much.

Did you know I even drew an airline that I named Pedu Airline, after my kampung? I envisioned and drew airports and MRT train stations too. I wanted bigger things for Kedah! That time, I wanted to be an architect, but slowly I became interested in fashion.

I was employed as a temporary crew at AirAsia under DRB-HICOM. After 4 months of flying, I heard the rumours that AirAsia will be bought by someone to start a new set of airlines, the first low cost airline in Asia. The new boss is called Tony. I had no idea who he was.

When I arrived at Subang airport, I was late. I asked, ‘What’s going on?’ They told me, ‘You just missed the designer’s uniform presentation.’ Tony said, ‘If anyone likes it, please raise your hand.’ No one raised their hands. Then Tony said, ‘So what do we do now? Can anyone suggest?’ I remembered Suhaila, one of the cabin crew, was in the room. She said ‘Lazarus can design.’

We only had a week to create a uniform in time for AAC’s new livery launch! Because we had no time, we had to quickly tailor-make one of the designs – from finding the fabric, to finishing the prototype, to the fitting!

The outcome was a little disappointing, but we had to go ahead with the launch. After that, I went back to the drawing board and took another 2 weeks to explore different adjustments.

I decided to redraw my favourite design with a different silhouette, and then I showed it to Tony again. Tony’s reaction? He nodded and said it was ok. I think I stared at him, completely speechless, because all I did was to redesign something that was already there!

The brief was simple – Design a uniform that doesn’t look like a conventional uniform. Make it red!

My first vision – It must look good on all body shapes. Second, I thought a zip-up element will help with poise and posture.

With a 25-minute turn-around and transit duties, the ability to quickly zip-down the jacket seemed practical. Also, because we’re still an Asian country, I adapted the beautiful silhouette from our national dress – the kebaya.

Tony was very particular about the colour. He wanted a shade of chilli red which I couldn’t find anywhere in Malaysia or even Singapore. Finally, I told Tony maybe we can find it in Dubai as they’re known for textiles. Tony agreed and sent me to Dubai. The first shop I visited? I found exactly what I wanted, and we imported the fabric for production. I loved how the fabric falls on the body, and it added a glamorous element!

During the roll-out, sometimes we had mixed crew-uniform operating together – the new red and the old green. If passengers ask about it, we tell them ‘green is worn by juniors only’. It was an exciting time rolling out the uniforms. I was thrilled to be able to contribute, and have the design come to life! Our growth was so quick that production couldn’t even catch up.

I feel really happy to see my friends wearing the uniform. They all look good and beautiful to me. I love it. It brought so much joy.

Watch the interview with Lazarus below, and see his sketches and photo collection here. 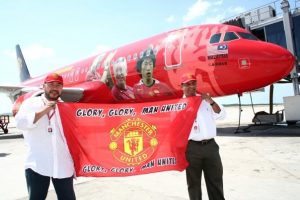 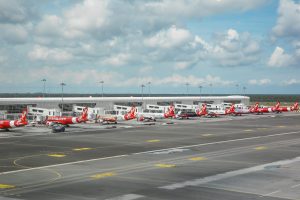 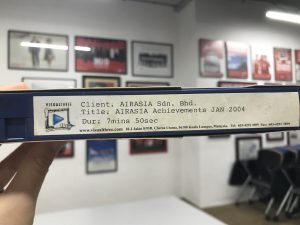